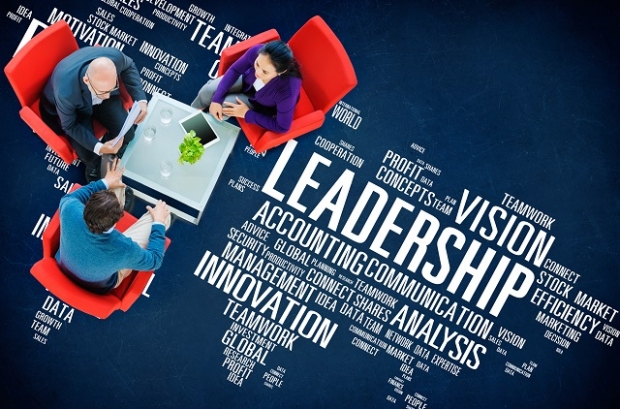 A few years ago, I met Diana. Diana was promoted from HR director to General Manager in a multi-national in Romania. Diana had a strong personality, but also took good care of the people in the company. She was clear in her vision and shared that vision with all 200 people in the company. I found her decisive, empathic and open to new developments in the market and with all stakeholders. In my opinion, she was a very good leader. One and a half year later she was demoted and became deputy general manager. Her successor Dragos was a man who didn’t listen, had his own (hidden) agenda, but was also very decisive. Let’s say that he was the typical old-fashioned manager. Dragos is still the GM nowadays, even while the sales decreased dramatically and with that also the turnover and profit. Every quarter the head quarter is asking why he has these bad results and the Dragos has always nice excuses: “The market is decreasing”, “The people are not motivated”, “They hired the wrong people”, “I don’t have the right resources” etc. etc. etc. “But……. next time I will be here and you will see that the trend will go upwards”. Till now it never happened and still Dragos is the GM. He is seen by headquarters as a ‘tough’ guy who makes the best of it in a difficult market with difficult people. And he is not seen only as ‘tough’ but also as ‘very decisive’. He is controlling everything to keep the costs as low as possible and is putting a lot of pressure on sales in order to increase the turnover. Diana was also ‘tough’ and decisive, that she has in common with Dragos. But Diana didn’t make promises that she couldn’t keep, and she was determined to fulfill her vision, together with all people. And therefore, she listened also carefully to her people, what was in the opinion of headquarters a serious weakness. My old boss said more than once to me: ‘Everybody can fail when you put him or her in the wrong position’. And Diana was clearly in the wrong position with a very ‘masculine’ headquarters. After Diana has chosen to leave the company (1 ½ year after her demotion) she became again a General Manager in the same branch, in a bigger multi-national and with a HQ that is used to have women as leaders. They use her strengths to build up a great team with increasing sales, turnover and profit. Unfortunately, the old company of Diana didn’t want to see that, in general, women are better leaders than men.

I will come later with facts, but first some considerations. Leadership is all about relationships. As a leader, you don’t need to ask if you have relationships with employees, the question is what the quality of the relationships are. And, also generally speaking, women are better in managing the relationships than men. Men are better in the content of the subject. Off course also very important, but in leadership less nowadays. And, also, research shows this. The company Zenger Folkman concluded in 2014 that women scored higher in leadership on 12 of in total 16 competences (see also the graph 1). 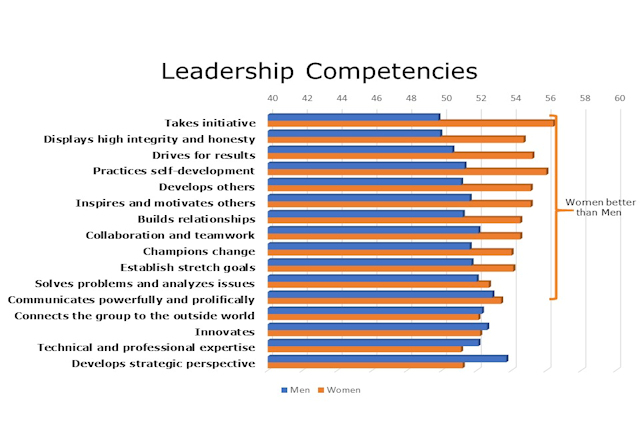 They got the data for 16.000 people who were all leaders (2/3 men and 1/3 women) and for every leader they asked 360 degrees feedback forms. Average, they interviewed for every leader 13 respondents around him, including the peoples who were managers, subordinates and peers. So, we are talking about 208.000 respondents.

So, at first glance we can indeed say that women are better leaders than men. But…… when we look more in depth in the research, we see something interesting. With this big amount of data, you can make different relevant cross sections. The most interesting in this perspective is when we look how leaders are perceived at different ages. Under the age of 40, men are scoring higher on the leadership competences. After 40, women become more effective as a leader compared with men (see also the graph 2). 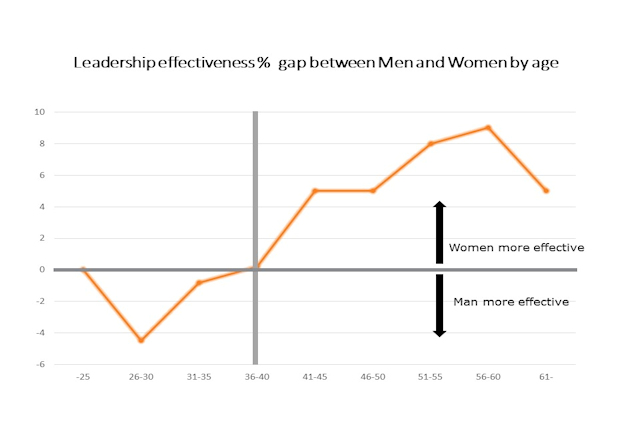 The reason for that lies in the competence ‘practicing self-development’. Where men score significantly lower after 40, women keep on the pace with self-development. And become better leaders than men (see also the graph 3). 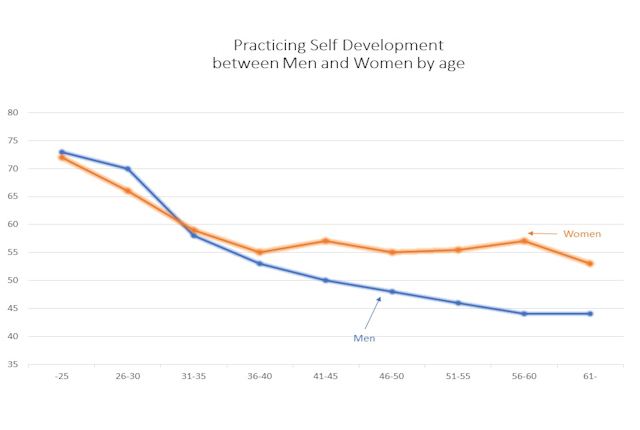 So, for me is not the gender that makes the difference, but the way we deal with ourselves. If you, as a man, want to learn every day and your whole working life, you will find for sure the benefits in leadership. And to women leaders: Keep up the good work!