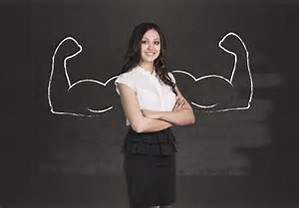 When I was asked to write an article special for the 8th of March, I had some options. I could write about a trending topic in business: Gender diversity. But I would like that firms are busier with the diversity of the mind. Much more interesting and more useful than talking about differences between men and women. I could write about the glass-ceiling that women often experience, the prejudices of men. I could write if women as leaders are bold enough comparing with their male colleagues (in fact they are even bolder). Enough material to write about, but this doesn’t mean that anything will change. These are just reflections. But Diana, whom I am coaching, gave me a better idea. Diana told me that she felt often insecure when she had a management meeting. She was surrounded by male managers who showed a lot of self-confidence and didn’t show any doubt by making decisions. It looked to her that they didn’t have weaknesses. I am also coaching quite a lot of male leaders and managers and I could assure her that almost all didn’t have the self-confidence that they expressed and that they also have their weaknesses. But in the ‘male’ world, you don’t show that. I could tell her that almost all managers (female and male) instantly can say what their weakness is. This is also a reflection and this said to her doesn’t mean it makes her more comfortable in her job.

But there is a great advantage in the fact that women feel often more insecure than men. That means that they are reflecting more often on themselves than men do.  And that makes also that you can do something about it because you already reflected on the problem.

As mentioned, most people are aware of the weaknesses they have. Research shows that 97% of people can readily identify a career-limiting habit they have. We are not reliable enough, we don’t show empathy, are fearing risks and uncertainty, want to much control, avoid conflict etc. etc. We know that our weaknesses are limiting us in person and in our profession. But few of us make any progress in eliminating them. But as said before it doesn't have to be that way. This is what you can do. Only 3 steps to follow.

Step 1: The Crucial Moments
Diana had to make a presentation and present it in front of her boss and the whole board. And it was quite an important subject and she had only 15 minutes to present. She knew she had to start with the presentation, but…. She was busy with answering e-mails, answering the telephone, everything except working on the presentation. Her weakness was not bad prioritizing. She confronted herself with her feelings. Those feelings can be feelings of anxiety, afraid in making mistakes, fear, inadequacy or others. Be aware that most of these bad habits have the same nature. So, don’t stay on the surface, dig a little bit deeper. When you have done that, look for the moments that provoke these responses. That are the crucial moments. Try to be as precise as possible when and where it happens, how your mood is, with whom, circumstances etc. etc. By doing this, what actually doesn't cost that much time, you limit already the problem. You will realize fast that only in certain situations you feel uncomfortable. Diana felt very uncomfortable because she had to present to her boss together with the board, she had a time limit and a difficult subject.  Diana didn’t like to present, never, she even felt uncomfortable when she wanted to present a subject to her team. When we analyzed the critical moments, she only was uncomfortable in the situation I just described. So, since then, she knew when she didn't feel comfortable and was much more relaxed in all other presentations.

Step 2: Deliberate Practice
Psychologist Anders Ericsson found that you can steepen your learning curve when you mix safety and challenge. He called it deliberate practice. As a metaphor, we can say that you don’t start to learn to swim on the deep end of the pool. No, you start safely on the side that you know that you can stand, if needed. To practice, you need also your crucial moments. Because they are your challenge. Diana started practicing with ‘easy’ presentations. This meant for Diana that she has chosen to present subjects that were familiar for her. After that, she put herself a time limit and after that she presented more complex subjects. After every presentation, Diana took time to reflect on the effectiveness she had in the presentation and her stress level. The first went up and the second down.

Step 3: Know your emotions
You can make really steps forward when you practice knowing that it is a challenge and that you can still have emotions during that challenge. Don’t take too big steps. The possibility that you feel uncomfortable again gives a serious drawback. And that doesn’t help you at all. It is ok to feel a healthy stress when you practice, this helps you thrive in challenging times.

When you keep these 3 items in mind you can change your weaknesses and feel stronger in this male world. Have a great 8th of March!