The leader and his ‘Yes-man’ 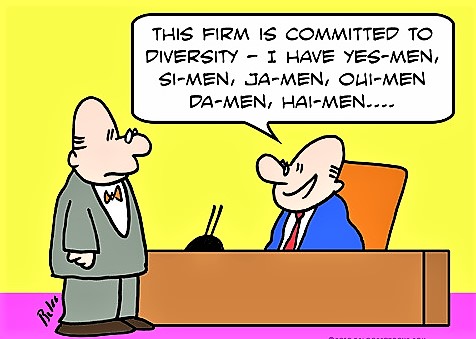 Rob was appointed as CEO of the Dutch railways in 1992. He got the task of the Dutch government to restructure the Dutch railways in a profitable business. He hired McKinsey as consultancy company who had to give the blue print for the new organization structure. They came up with a plan that he wanted to follow. Short after he hired Hans and Marion. Two experienced managers who would help him with the restructuring. The 3 formed the board of directors.

Soon after they started it became clear that Rob wasn’t an easy person. He could become furious when things didn’t work out as he planned, and he didn’t want to listen to people outside of the circle of his confidants. He surrounded himself with what I call ‘yes-man’. People who blindly follow their leader without any criticism and defend him all time. Hans and Marion were such people. They were in character quite the same as Rob and they followed him in his thoughts and decisions. They became blind for what was happening outside their board room.

Time passed and the Dutch railways were confronted with bad results instead of better results. Employees, customers and shareholders (in this case the state) were more and more unsatisfied about the Dutch railways. 20% of the trains arrived too late, what was an ever-low result. Even the state set-up a system that had to force the Dutch Railways to better results. It could cost the company a punishment of € 11 million, when they didn’t improve on the results. Nothing happened.

In 2001 the 3 board of directors were dismissed. They left to the new board the Dutch railways in a uncontrollable state, with regular strikes, and rapidly decreasing results. In a rare interview, Rob stated, after he left, that nor the employees, customers and the state understand what they were doing and achieving in the board of directors.

For everyone in the country it was clear that this board didn’t understand at all what was going on in the real world.

I was thinking about this case when I heard of a similar situation here in Romania. A respected company lead by a foreigner. He took over the companies lead when his father stepped back. His father had a team were people could differ from ideas and could be critical on decisions. When the son took over he slowly changed the team. The consultant they had for years was kicked out, because he was critical, and more people changed in the management team. But in the meantime, there were people outside the company who saw opportunities. One of them, lector in one of the universities in Romania, saw a possibility too fill in a gap. Using all kind of possibilities, using other innocent and hardworking people also, and flattering the CEO he became a new consultant for the company. This lector only has one purpose: better income. The question is if the company is helped.

Of course, it is nice to have people around you who are agreeing with you. It looks like real team work and it makes life easier and looking smoother. But when they follow you as leader without criticism give an answer on the next questions. Is your point of view on business topics always right? Do you take always the right decisions? Are you working on the most effective way? Are the company results that what you expected? Do you consider that you are the most important and indispensable person in the company? If you answer yes on all questions: Good luck and dream on! You don’t want and need help.

But if you have at least one ‘no’ in answering (but I hope you have more), you can use support. Support in the form of critical team members or employees, a consultant or your relatives as husband or wife. It cannot be that you take always the right decisions with the right point of view. It is even dangerous to take important decisions without asking advices from different stake holders. Dangerous because a wrong decision can be a threat for the continuity for your company.

When I see that in a management team there is a discussion about a decision I suggest almost every time to look for a third possibility, that is not a merge of the other 2 possibilities. Background: if people are not agreeing on the decisions there is a realistic chance that both are not the best. Go to look for the alternative third.

To overthink another possibility of taking decisions I want to give you the example of how they take decisions in monasteries in Tibet.

The leader of the monastery (Khenpo) is used to take only decisions that doesn’t have a substantial impact. If he is faced with more impact for the monastery he takes the decision together with his management team (Chanzo-khang). And when a too taken decision has a big impact they debate and take a decision with all monks. And in the European world we do it often just opposite.